My last post was about the terremoto in Italia and I listed ways you can help with earthquake relief.  One of these ways was to order Pasta all’Amatriciana at one of the many restaurants participating to raise money for the Croce Rossa Italiana.  I realized that not everyone will have a restaurant in their area participating, so I am posting a recipe, just in case anyone wants to host their own small fundraiser. August 27-28 would have been the Spaghetti all’Amatriciana festa in Amatrice.

Pasta all’Amatriciana-also known as Pasta alla Matriciana in dialetto Romano, is made with guanciale (cured pork cheek), Pecorino Romano, and pomodoro (tomato).  Peperoncino is often added.  Pasta all’Amatriciana originated from Pasta alla Gricia, made with guanciale and pecorino.  It is basically Pasta Carbonara without the eggs. Shepherds near Amatrice carried the simple ingredients with them into the fields.  The pomodoro had not been brought to Europe yet.  In Amatrice, they started making the sauce with pomodoro once it had been introduced.  When Amatriciani moved from the outlaying areas to Roma, the sauce became popular, and is now considered a staple of Cucina Romana.  In Roma, Amatriciana is made with bucatini, which are spaghetti with a hole down the middle, or rigatoni, but in Amatrice, it is only made with spaghetti! 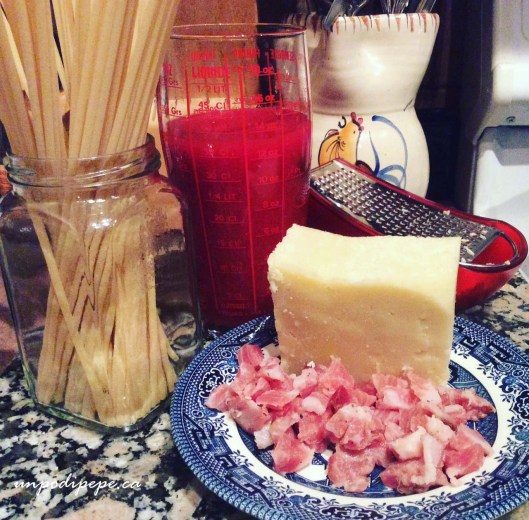 100g guanciale (pancetta can be used if guanciale not available)

Cut guanciale into strips or cubes. In a frying pan, cook guanciale in the olive oil.  When the white part becomes transparent, add a half glass of white wine.  This is optional, but i’ll bet those shepherds always had vino handy! Let it evaporate, then add tomatoes and pepper.  While this is simmering, cook spaghetti in a large pot of salted water.  Cook for 1 minute less than the time it says on the box! Drain well then add to the pan and toss in the sauce.  Serve with a generous amount of Pecorino Romano.  Serves 4. Buon Appetito!