Tuccanese (too∙can∙NEH∙seh) is a rare grapevine grown almost exclusively in and around Orsara di Puglia, Provincia di Foggia. It was previously thought to be a clone of Sicilian Perricone brought to Orsara by a Sicilian noble family or that it was a clone of Piedirosso.  A 2008 Italian DNA study found a close genetic relationship between Sangiovese, the well-known ‘Chianti’ grape and 10 other grapes including Tuccanese. Sangiovese has many ‘strains’ but the grapes and resulting wine are very different. The name Tuccanese is probably a corruption of ‘Toscanese’ or ‘Tuscanese’ meaning ‘from Toscana’.  Tuccanese may have been brought from Toscana by the Majorca-Strozzi family from Firenze, who held a duchy near Avellino in the 1600’s. Small pockets of Tuccanese grapes grown for private family use are also found in Campania, in Calitri, Montecalvo Irpino and Bagnoli Irpino, the farthest being 80 km from Orsara.

Tuccanese was in danger of extinction but attention to local viniculture in the last 20 years has resurrected it.  Now Tuccanese is an example of Artigianato vitivinicolo-artisan winemaking. The vines do well at Orsara’s 650m altitude and the high calcium and clay content of the soil.  Tuccanese grapes are very resistant to environmental conditions, immune to illnesses, and mature late- in the first 2 weeks of October.  Wines made with Tuccanese are a dark ruby red, dry, tannic and full bodied with a high alcohol content. They have notes of berry, plum, licorice and pepper. Tuccanese is definitely ‘un vitigno locale’, as it is really known only in and around Orsara, where several families grow it for their own table wine.  Really good table wine. My Bisnonno grew Tuccanese on his land at La Cupa, although the vines are no longer there.  Now the land has 81 beautiful olive trees.

Tuccanese has not yet been discovered by the world, but there are 2 commercial producers, both in Orsara di Puglia. One is my amico, il cuoco-contadino Peppe Zullo and the other is my neighbour, architect Leonardo Guidacci! You won’t find these bottles at your local liquor store!

Peppe Zullo produces 20-25,000 bottles per year. His 2 wines are Ursaria and Aliuva. Aliuva is 80% Tuccanese 20% Uva di Troia (Nero di Troia) and Merlot.  Ursaria is 80% Tuccanese, 20% Uva di Troia and Cabernet, and is aged for 5 years in wood barrels. Peppe’s vino is used in his restaurant and event facilities and the rest sold on site. Peppe’s wine cellar La Cantina del Paradiso, designed by Nicola Tramonte was featured in the architectural exhibit ‘Le Cattedrali del Vino’ at the Biennale di Venezia in 2010. It is built into the side of a hill, with a vineyard on top! As he likes to say it’s the only cantina where you have to climb up stairs! Stay tuned for a post about the cantina.

Leonardo Guidacci has been making wine since 1997. His cantina called ‘Il Tuccanese’ after the grape, produces 5,000 bottles per year. Leonardo’s 2 wines are Magliano and Sannoro. Magliano is 100% Tuccanese. It is named after the Contrada (district) of Magliano, where the grapes are grown. Sannoro is 80% Tuccanese 20% Aglianico. His showroom/tasting room/architectural office is in Piazza Municipio, around the corner from my house. You can go for wine tasting and also discuss plans for home renovation! 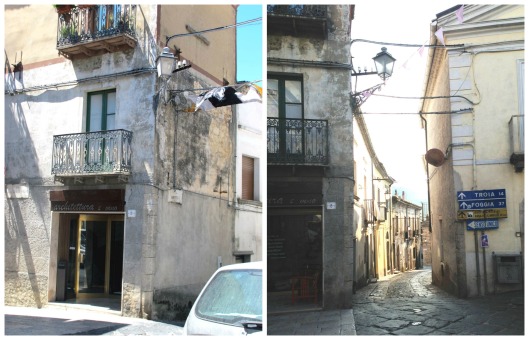 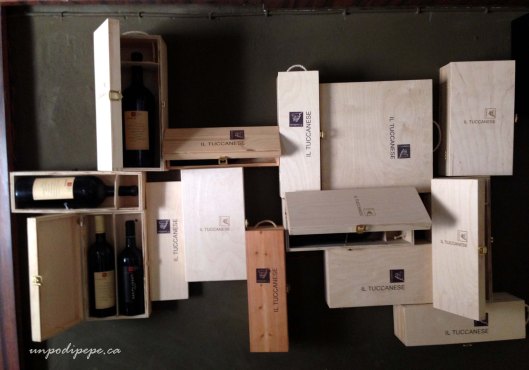