Orsara di Puglia is ‘un borgo medioevale incantevole’ (an enchanting medieval village) on the slopes of Monte San Marco in the Dauno Subappenino area at an elevation of 650 m (~2100 ft). It is surrounded by forests, rolling hills, vineyards, wheat fields and olive groves. Until 1927, it was in the province of Avellino (Campania) which is why it is called Orsara di Puglia. In 1951, before mass emigration, the population was over 7,000. Today the permanent population is just under 3,000. I spent the first 27 months of my life here, and I return every year for some ‘aria di montagna’ (fresh mountain air). This post is an introduction…the first of many Orsarese posts! 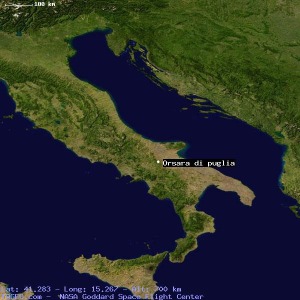 Orsara is built on a site with natural caves, which made it favourable for settlement. There is evidence of settlement in the area in the 11th Century BC, and Greek colonization as early as the 8th Century BC. There are many legends about the origins of Orsara, but my favourite-definitely the coolest-is that it was founded by the Greek hero Diomedes, who came to Puglia after the Trojan War. Legend also has it that a bear and her cubs had a lair in one of the caves Orsara was built on. The name comes from the Latin Ursus (bear) and aria= Ursaria meaning a place of bears.

The oldest part of Orsara, the Centro Storico or historic town center, is built around the Complesso Abbaziale dell’Angelo.  This complex consists of the pre-7th Century cave church Grotta di San Michele Archangelo with a connecting 1527 church, the exquisite Romanesque Chiesa dell’ Annunziata, and Palazzo Baronale.  The last 2 were the former Abbazia di Sant’Angelo (Abbey of the Holy Angel), a monastery built in the 11th-13th Century.  The Abbazia included a hostel for pilgrims and was home to several orders of monks, incuding the Spanish Cavalieri di Calatrava (Knights of Calatrava) who arrived in 1224. The Calatrava expanded the abbazia, including a hospital, and were an important part of Orsara’s history.  Palazzo Baronale is now private homes except for the basement which is an archeological museum.  The Complesso Abbaziale has seasonal opening hours, and can also be visited by appointment.

Orsara di Puglia is a member of the Slow Food movement Cittaslow. A gastronomic paradise, Orsara has 8 restaurants, 4 pizzerie, an enoteca, a pub and a cooking school http://www.peppezullo.it. Orsara even has its own designated DOC cheese-cacioricotta, and 3 IGT designated wines. Thanks to the maze of steep, windy cobblestone streets and my morning walk to La Montagna Spaccata, I can eat lots yummy food and still fit into my clothes.

In 2010, along with Alberobello, Orsara became one of only 6 towns in Puglia to be distinguished with a Bandiera Arancione (orange flag), a seal of quality from the Touring Club Italiano. The Club certifies small inland towns that are welcoming to visitors and have historic, cultural and environmental significance. For more information http://www.paesiarancioni.net (in Italiano) and http://www.bestsmalltownsitaly.com/town/orsara-di-puglia-apulia-south-islands/ (in English). There are now 13 paesi Pugliesi with a Bandiera Arancione designation. 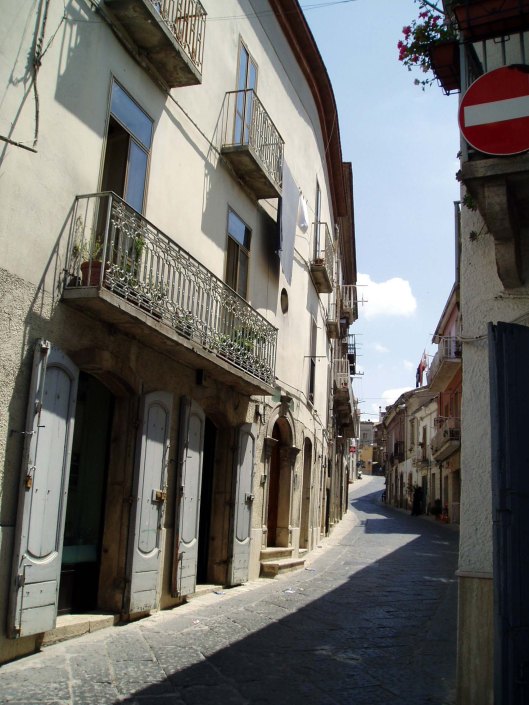 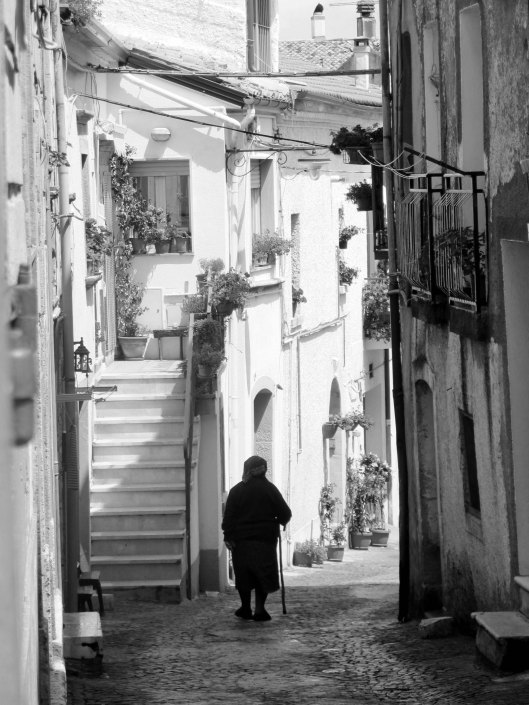