500 years ago, Michelangelo entered the Pantheon and stated that it looked more like the work of angels than humans. The Pantheon is an architectural masterpiece and the most well-preserved building from Ancient Rome.  This is probably because it has been in continuous use since it was built.  The original use of the Pantheon is not known.  Many think it was a temple to all the gods, since ‘Pan-theos’ is Greek for ‘all gods’, although Ancient Roman temples were dedicated to single gods.  ‘Pan-theos’ might also refer to the heavens, the territory of the gods.  According to legend the site is where Romulus, the founder of Roma ascended to the heavens. 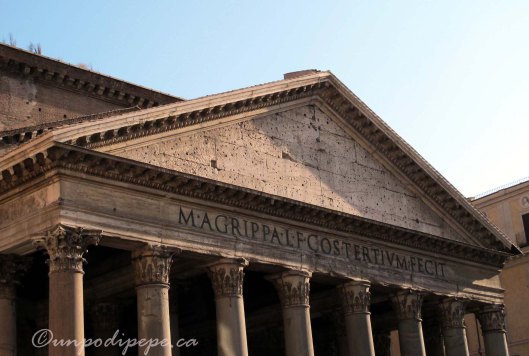 Marcus Agrippa, Augustus’ commander in chief built the original Pantheon on his own land, so it may have been a private building.  This building burned down in 80 AD and then was struck by lightning and burned again in 110 AD! The Pantheon standing today was completed around 126 AD by Emperor Hadrian.  He kept the original inscription under the pediment ‘M.Agrippa.L.F.Costertium.Fecit’ (Made by Marcus Agrippa, son of Lucius in his third time as Consul) which caused confusion about the construction date.  The Pantheon was given to the Pope in 609, and it has been the Church of Santa Maria dei Martiri ever since, but it is usually still called the Pantheon.

From the outside, the Pantheon looks like a Greek temple. It is actually a round building (rotunda) with a portico of eight 12m (39 ft) high granite Corinthian columns up front and 8 more in behind. These columns are each a single 60 ton piece of stone quarried in Egypt.  Imagine the journey these huge stones made to get here….they were dragged through the desert, barged down the Nile to Alexandria, shipped across the Mediterranean to the port of Ostia, barged down the Tevere to Roma and then hauled overland to the site of the Pantheon!

Enter into the Pantheon and it is immediately clear what Michelangelo meant. Overhead is the largest unreinforced concrete dome in the world-still after almost 2,000 years! The Romans invented concrete, using a mixture of volcanic ash and soil from Pozzuoli, lime and rocks, but they did not have rebar, so this is amazing! The 8 m wide hole in the roof is the oculus and the shaft of light coming in from the sun moves slowly throughout the day like a sun-dial.  When looking up, the dome feels like it could rotate. The oculus and front door are the Pantheon’s only sources of natural light.  Concrete walls 6m (20 ft) thick support the dome, which is 6m thick at its base but narrows to 1.2m (3.9 ft) around the oculus.  Lighter materials, such as tufa, pumice and even broken terra cotta pots were used towards the top to further lighten the load.  The oculus also lightens the load at the very top, acting as a compression ring where the roof would be its weakest. Rainwater coming in through the oculus is drained off through holes and a drainage system under the slanted marble floor.

Is it a mask for Carnevale? No, these are drainage holes in the floor right below the oculus!

The height of the oculus is 43.3m (150 Roman feet) and the diameter of the building is also 43.3m. A perfect 43.3m sphere would fit inside the building. For another visual, if the dome was flipped upside down, it would fit perfectly inside the rotunda.

The perfect mathematical proportions of the Pantheon invoke harmony and symbolize the earth and the heavens. The Pantheon has provided inspiration to architects including Brunelleschi and Michelangelo for almost 2,000 years.  Public buildings throughout the world are modelled on the Pantheon’s ‘portico and dome’ design. 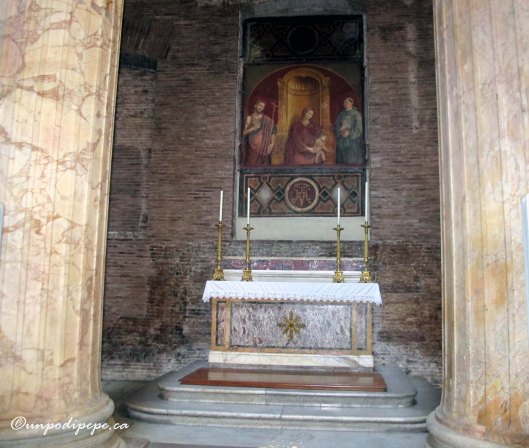 In the 17 the Century, the Barberini Pope Urbano VII removed the bronze ceiling from the portico and melted it down to make cannons for Castel Sant’Angelo. The outrage prompted the saying ‘Quello che non hanno fatto i barberi hanno fatto i Barberini’ (What the barbarians didn’t do, the Barberini did), implying that the Pantheon had survived numerous barbarian invasions, only to be looted by the Barberini family. In addition to functioning as a Classical Masterpiece and a Church, many notable Italiani are buried in the Pantheon.  Some of these include Vittorio Emanuele II, Umberto II and his wife Margherita di Savoia, Rafaelle Sanzio da Urbino (Raphael) and his fiancée Maria Bibbiena. 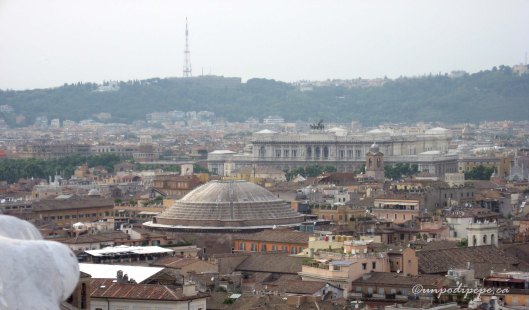 ‘La Pioggia delle Rose al Pantheon’ (the rain of roses) is on my list of things to see. This takes place on Pentecost Sunday, 50 days after Easter.  At noon, right after Mass, Roma’s Vigili del Fuoco (fire fighters) climb to the top of the dome and drop thousands of rose petals through the oculus as choirs sing.  The rose petals symbolize the Holy Spirit coming down to earth.  Even Michelangelo would be impressed!

The dome and oculus, viewed from the roof of Grande Hotel de la Minerve

Il Pantheon is also featured in my post ‘Un Giorno a Roma’.