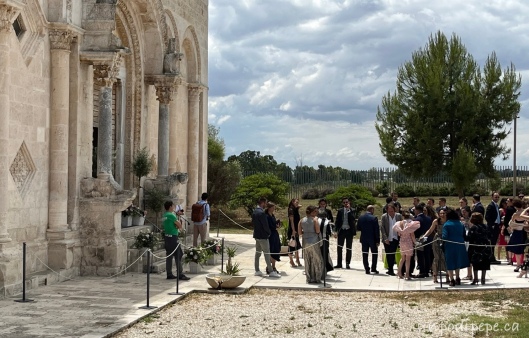 Viva gli sposi!  After a 3 year ‘pandemic hiatus’ I finally made it back to Puglia. My trip was earlier than usual to attend un matrimonio in famiglia -a family wedding in June.  Gli sposi were Federica and Antonio. 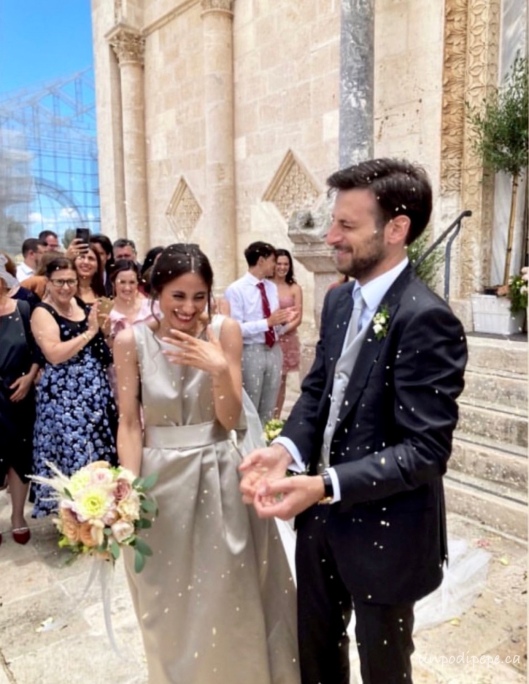 The wedding was held at the 900 year old Santa Maria di Siponto. The church is in the architectural style Romanica Pugliese, Pugliese Romanesque. Byzantine and Islamic influences are evident in the pure, simple lines and geometric patterns. The building is square, which is unusual for a church.

Our day started out with heavy rain.  My parents, sister, nieces and I ran to the car with our umbrellas for the 1½ hour drive from Orsara di Puglia. Luckily it was sunny by the time we arrived. The ceremony was held at 11 am and the stark white interior of the church was bathed in light!

The look on Antonio’s face when he sees Federica at the altar is priceless. 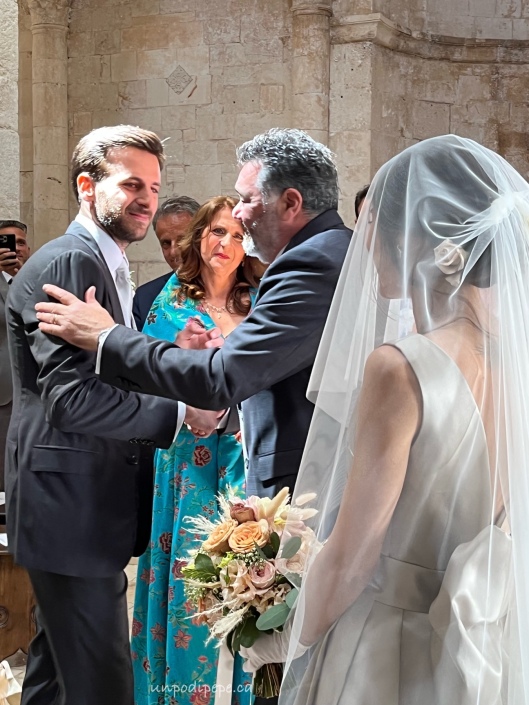 The 4 witnesses, called compari, and the parents of the bride and groom also take part in the ceremony. 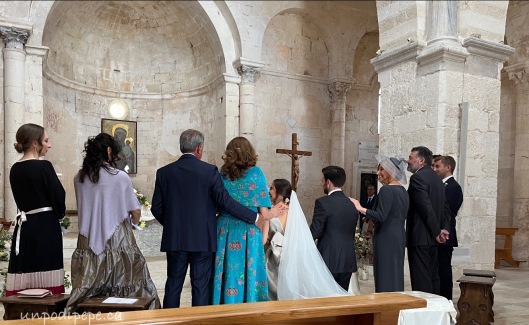 Federica looked stunning.  The wedding dress was handmade by her 91 year old nonna!  Nonna Celestina made it with fabric she had kept from the time when she owned a fabric store in Foggia many years ago. The dress is ‘a portafoglio‘ which means that it had a short skirt underneath, visible only when the slit opened. Nonna even made a spare dress, just in case!

Since we were in Puglia, we were surrounded by olive trees. I fit right into the floral arrangements with my olive coloured dress with pink and silver flowers.

The reception was held at Tenimento San Giuseppe, 4 km from Foggia. We started out with aperitivo in the main building, then moved to another section for the main meal. 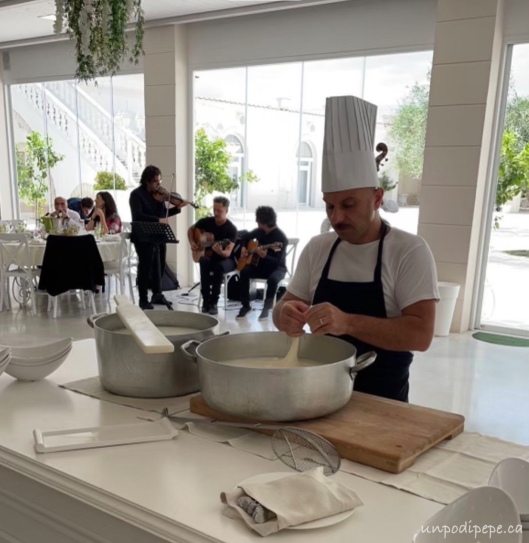 Later we moved into the cantina for degustazione di vino, where I found a tasty Susumaniello that was too good! Dessert was back in the main building.  All of this moving around really helps with digestion! 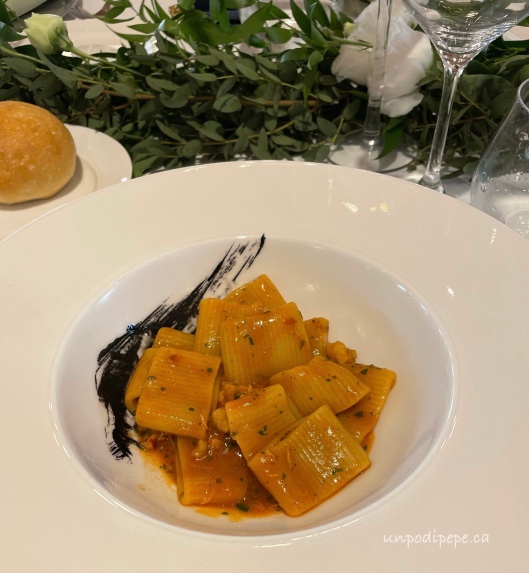 The dish in the photo above is ‘mezzi paccheri rigate con salsa di gamberl e astice’, pasta with shrimp and lobster sauce.  The black smudge on the plate is squid ink. I was too busy socializing and eating to take many food photos, so read the menu and imagine it yourself!

Dancing was everywhere.  Instead of having to sit through the entire meal and a bunch of speeches and wait for the end of the night to dance, dancing happens throughout the reception. Also good for digestion!

One course is served…then dancing, more food, then more dancing, etc.  Since the wedding was in Puglia, there was also dancing outside under the olive trees. 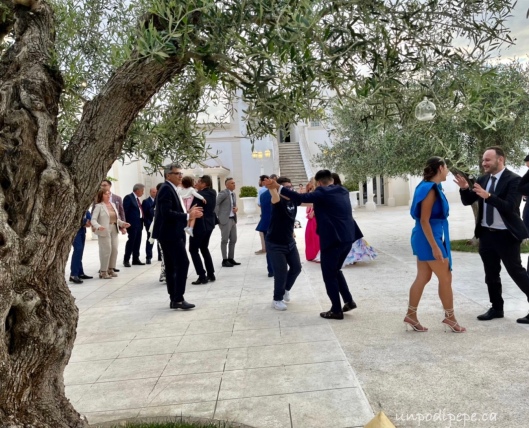 Federica likes swing dancing, so there was a swing band and later in the evening, my cousin (father of the bride) and his band played their funky music.

Cake cutting was held outside, at the bottom of the dramatic staircase.  In the photo, you can see a bit of Federica’s ‘spare’ dress, while Antonio gestures for us to move out of the way.  He probably said ‘livt da nanz’.

Guests take home a little bag of confetti for good luck.  These are not what you throw at the bride and groom.  They are sugared roasted almonds, sometimes with a chocolate filling.  Traditionally there are 5 almonds that represent health, wealth, happiness, fertility and long life.

Bomboniere are also handed out at the end of the night.  These are a small gift from the bride and groom to thank the guests for celebrating their special day with them.

I hope you enjoyed this peak at a wedding in Puglia!  Auguri Federica e Antonio! Ciao, Cristina