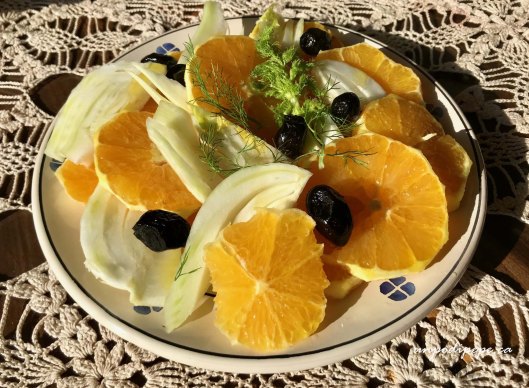 Insalata di arancia e finocchio-orange and fennel salad always brings back memories of my grade 1 lunchroom. My delicious lunches included home made crusty bread stuffed with melanzane and roasted peppers, prosciutto, capicollo or cotoletto di vitello, frittata, pizza or ‘chocolate sandwiches’ made with Nutella. Papà would often make me Insalata Purtuall’, with oranges cut crosswise in rounds, fennel and black olives, drizzled with olive oil and a bit of salt.  A true flavour explosion for 6 year old me.  I did not know why everyone at school thought my lunches were so weird.  The ‘Anglo’ kids made fun of them, and even the teachers eyed my food suspiciously.  Today all of these foods are available and trendy, so who is laughing now?  Ha! I do not remember being too bothered by the teasing.  I actually felt sorry for my classmates.  Their lunches were gross, usually consisting of ‘plastic’ cheese on bright white squishy bread that was sliced like cake! Poveretti. I will have to write more about my early gastronomic experiences in another post….

A while back, Frank from Memorie di Angelina wrote about orange and fennel salad, and I commented that we called it ‘Portugal’ salad, but did not know why. I asked Papà why we called it ‘Insalata Purtuall’. Purtuall’ is dialetto for Portogallo which is Portugal in italiano. His answer surprised me. He said it was not a Portuguese salad, but purtuall’ is what the orange were called. Hmmm.  Soon after this, I was at a writers’ conference and one of the presenters displayed a map showing the word for orange across Europe in various languages. Aha! I saw that the Greek word for orange is ‘portokali’. This was getting interesting! 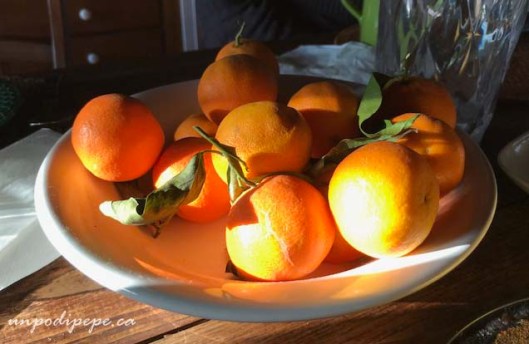 Arancia amara, bitter orange, was known to the Romans. Sweet oranges were only introduced to Europe and the Mediterranean in the 14th century. Portuguese ships were the first to circumnavigate Africa and brought sweet oranges back from the Far East. In many countries, oranges were named after Portugal-the country that they seemed to be coming from! In Greek oranges are portokali, in North Africa and most Middle East countries burtuqall, in Iran purtuqol, in Turkey portakal and in Hungary and Romania portokal. In most of Western Europe, the Mediterranean and Britain, the word for orange comes from ‘narangas’, Sanskrit for orange tree. For example, in italiano arancia, in spanish naranja, portuguese laranja, and of course english orange. There are a few places in Italia where the dialetto still uses the ‘portuguese’ term. In Campania, Puglia, Basilicata and Abruzzo, purtuallo or portajalli, in Sicilian partualli (or aranciù), and in Piemonte portugaj. In modern Greek, bitter oranges are called ‘nerantzi’ while sweet oranges are called ‘portokali’. Who knew that the yummy salad I used to bring for lunch in elementary school reflects thousands of years of history, trade voyages and etymology between East and West!

A ‘recipe’ is not really needed for Insalata Purtuall’. Just peel a few oranges and remove as much of the pith as possible, then slice them crosswise and lay them on a plate. Cut half a fennel bulb and slice in either small or larger pieces. Add ‘un filo d’olio’, a drizzle of olive oil and salt, then a few black olives and garnish with fennel fronds. I sometimes like to throw in some pomegranate seeds or rucola. It is hard to mess up this healthy, refreshing winter insalata! I recently found out that Insalata Purtuall’ was served at my parents’ wedding in Orsara di Puglia in the 1960’s, so now it tastes even better! 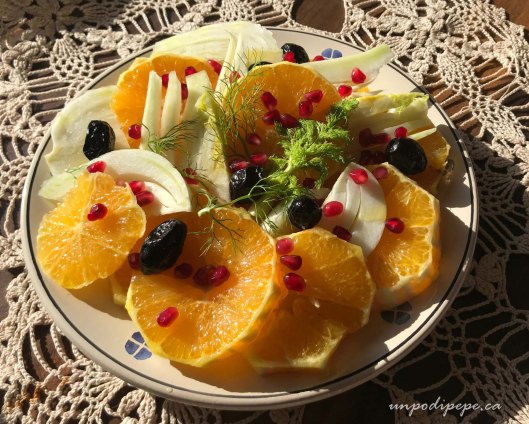