Lecce reminds me of a Caravaggio painting-Baroque, dramatic and opulent, with attention to detail.  It is unfortunate he did not live long enough to visit the city!  Lecce, in the Salento area of Southern Puglia is over 2000 years old and rich in tradition and local customs.  Originally called Syvar, it was founded by the Mesapii(Mesapians) from Crete.  There is a long history of Greek settlement here, in fact there is still a group of 9 towns called ‘Grecia Salentino’ where ‘Griko’ dialetto is spoken.

Conquered by the Romans in the 3rd Century BC, it was renamed Lupiae.  Hadrian moved the city 3 Km northeast in the 2nd Century AD and called it Licea. Then came the Byzantines in 549, followed by Orthodox monks.  Lecce and the Salento were an independent country from 1043 until 1463 when Emperor Carlo V conquered Puglia, and they became part of the Kingdom of Napoli until Italian unification in 1861.  Lecce was an important commercial city, with a building and cultural boom.

Lecce is best known for its dramatic Baroque architecture and ornamentation, which even has its own name-Barocco Leccese.  The style was around from the mid 1500’s to the early 1700’s, so even among buildings constructed at different times there is continuity of style.

The Baroque style features over the top details and intricate carvings that create a sense of movement.  Barocco Leccese is even more expressive and unique.  Windows, balconies and loggias are elaborately ornamented with twisting columns, scrolls and cornices.  They are carved with human figures, animals, wreaths, vines and gargoyles.  There is also a lot of marble, gilt and bronze involved.  Corbels supporting balconies are a common decorative element in Lecce.

‘Salento and the Barocco Leccese, including Lecce, Nardò, Gallipoli, Martina Franca, Ostuni, Francavilla, Galatina and Galatone’ are on the UNESCO World Heritage tentative list since 2006. This is the step before becoming a World Heritage Site.

Lecce’s buildings are made of Pietra Leccese, a local, honey coloured porous limestone.  It is soft and workable for sculpture, and was hardened and weatherproofed by soaking in a liquid solution made with whole milk.  Pietra Leccese is still one of the area’s main exports, mined in open quarries. 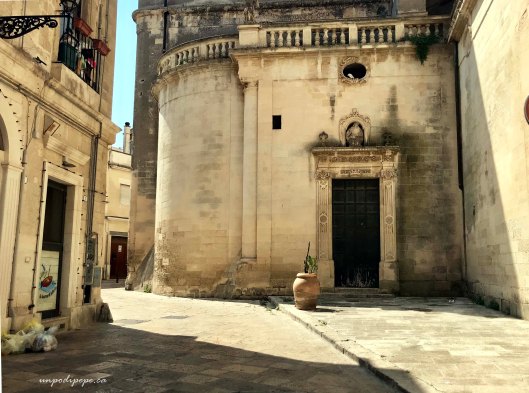 What to see in Lecce:

The Centro Storico of Lecce, with its narrow stone streets, 22 churches and unique architecture is a historically preserved walking museum.  It is mostly pedestrian only and very walkable.

After dark the streets are lined with outdoor seating for vino and aperitivo, and everyone is out for passeggiata.

Lecce’s defensive walls are gone, but 3 gates remain: Porta Rudiae, Porta San Biagio and Porta Napoli, which marked the starting point of the road to Napoli.

The 2 main piazze are Piazza Duomo and Piazza Sant’Oronzo, which are connected by Corso Vittorio Emanuele.  Piazza Duomo is a large open space, but you can almost walk by and miss it!  There is only one entrance, and it is closed off on 3 sides.  The Duomo is unique as it has 2 facades.  This was done so that visitors to the piazza did not have to face a big blank side wall as they entered.

The Campanile is the tallest in Italia at 68 m.  Piazza Duomo also contains the Palazzo Vescovile and Seminario, which is used mainly for exhibitions.

Piazza Sant’Oronzo, named for the first Christian bishop and the patron saint of Lecce, was the site of the mercato.  The 2nd Century AD Roman anfiteatro was discovered in 1901 during construction of a new Banca d’Italia.

The 20,000 seat arena was originally built outside of the walls of Lecce and was still in use in the 12thCentury. More than half of it has not been excavated!

Looking down over the anfiteatro is Il Sedile, a 1590 Gothic structure which was the seat of the town hall.  It is now the Tourist information office. 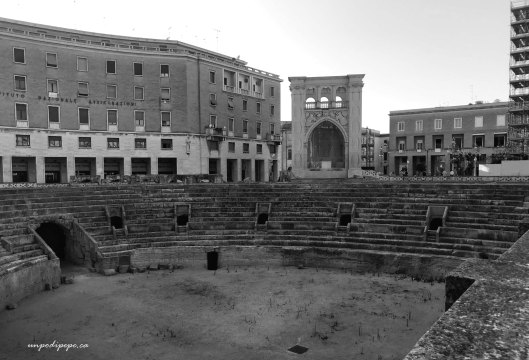 The Colonna di S Oronzo, is a column topped with a bronze statue of Sant’Oronzo.  It was originally built in 110 AD-one of a pair of Turkish marble columns marking the end of the Via Appia from Roma to Brindisi.  This one toppled and broke in 1528 and its twin is still standing in Brindisi. In 1659, the broken remains were given to Lecce to thank Sant’Oronzo for saving Brindisi from the 1656 plague.  The Brindisini have wanted it back ever since!

Not far from the piazza is Museo Faggiano- a unique museum, especially for archeology nerds like me!  Plumbing issues result in DIY renovations that uncover layers of history…..Blog post coming! 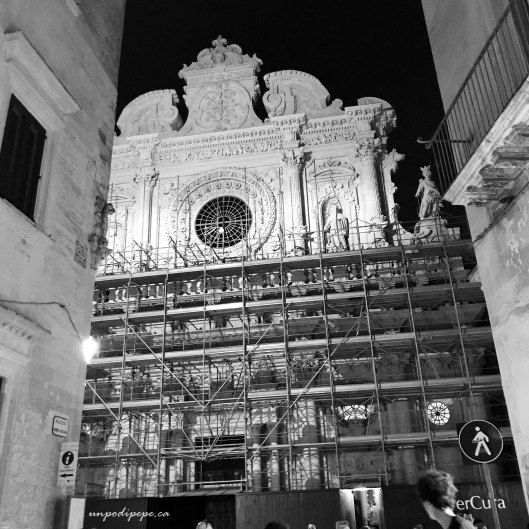 Santa Croce’s façade is the masterpiece of Barocco Leccese.  It took 200 years to build.  The exterior was recently cleaned and renovated.  The interior has a gilded coffered ceiling and 14 chapels with carved, twisting columns.

Sant’Irene is dedicated to the ancient protector of the city 1591-1639.  The interior is simple, but has twin Baroque side altars.  My amazing balcony at Palazzo Belli B&B looked out onto the side entrance.

Santa Chiara built in 1687 has an unusual façade and an extravagant interior with a wooden ceiling. There are loads of other beautiful churches to see in Lecce, but i have only mentioned the main ones.

Sometimes the scenery looks like an old movie set!  Walk down Via Palmieri, lined with grand palazzi, ending at Porta Napoli.

Things I did not have time to see include the Castello Carlo V and its carta pesta (papier maché) museum, the Teatro Romano and the Museo Provinciale.

Lecce is a great place to shop.  Specialties include colourful Pugliese ceramics, carta pesta, olive oil and vino.  Lecce observes the pausa pranzo which means shops are closed from 2-5pm.

Make sure to try pasticciotto.  My favourite is the kind with crema and amarena. Yum! 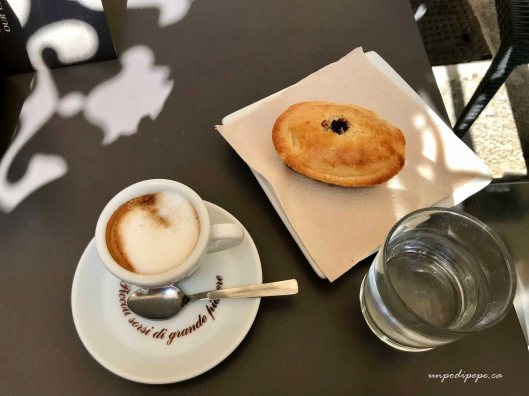 Sit outside to have Caffè Leccese –espresso on ice with almond milk and of course local vino, especially my favourite-Negroamaro.  Here is my cena with Negroamaro rosé. 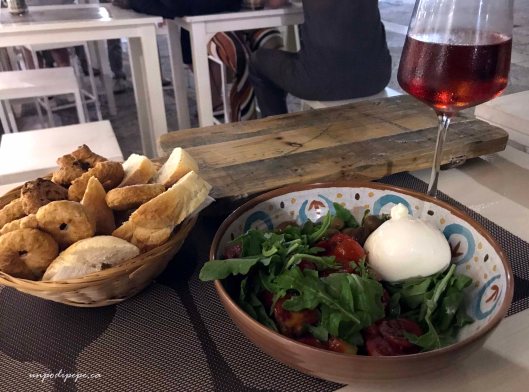 Since the centro storico is car free, dealing with a car in Lecce can be a pain.  During high season, it is easier to get around by bus or local train.  During low season, a car will make it easier to visit places that are not on the main train line. Lecce is between 2 seas, the Adriatic is 11km away and the Ionian 23 km away.

Lecce (pop. 96,000) is on the Adriatico train route that starts in Bologna.  The Stazione is a flat walk, 1 km south of the Centro Storico.  Last year, I took the train from Foggia (3 hours) staying 3 days in Lecce and 1 in Nardò. It was late July/early August, and not crowded at all. I booked my train and accomodation 3 days in advance. Try to avoid making Lecce a daytrip, as you will miss the beautiful evenings and fun nightlife. I am looking forward to going back as soon as possible!