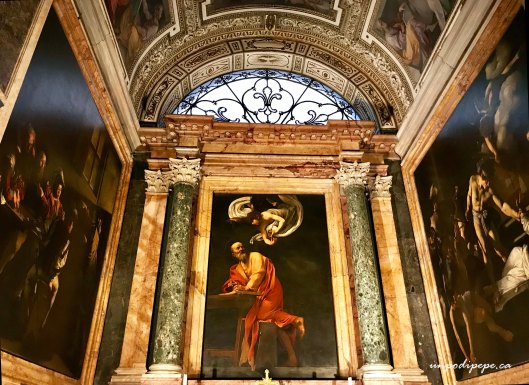 Caravaggio spent 14 years in Roma, and lucky for us, he left behind a lot of work. There are 23 capolavori-masterpieces by Caravaggio at 9 different sites in Roma, including 6 works that can be viewed for free! Si!  Free, gratis, senza pagamento. These 6 paintings are not in museums, they are still in the 3 churches they were originally painted for and have been hanging for over 400 years.  No entrance fee, no reservations or pre booking required, and usually no lineups!  The best thing about seeing artwork ‘in situ’-where it was created to be viewed- is that you can walk in and see the work where it was meant to go, just like someone in the 17th Century did.

It is possible to do a walking tour, visiting all 3 churches in a few hours.  As a bonus, along the way, this walking tour also makes 2 or 3 caffè stops.  If you missed my last post on the life of Caravaggio, read it here.

***Important Note before we start– the 3 churches on this wonderful passeggiata are primarily places of worship, so please be respectful.  Dress appropriately, speak quietly-if the artwork does not render you speechless, and avoid Mass times, especially on Sundays.  It may not be possible to visit during Mass.  There is no charge to visit the churches, but I always like to light a candle when I visit (€.50-€1).  You can also put €1 in a box to turn on the brighter lights if you need them to take a photo. 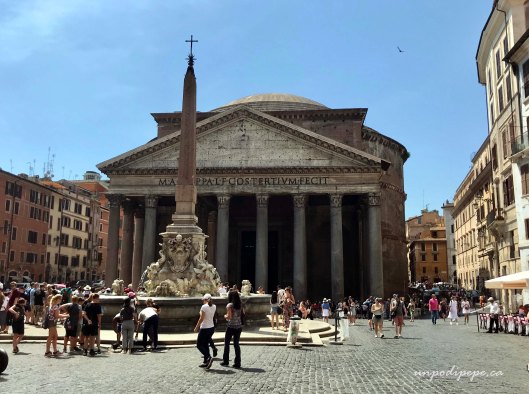 Andiamo!  Our passeggiata starts at Piazza della Rotonda, in front of the Pantheon.  It can also start at Piazza Navona, but I never miss the opportunity to visit the magnificent  Pantheon especially while there is still no entry fee. 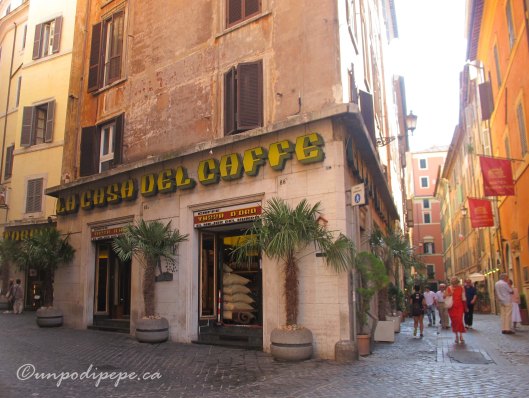 Facing away from the Pantheon, cross the street diagonally to the right and arrive at Tazza d’Oro, Via degli Orfani 84, known for their bitter roast caffè.  I seriously recommend ordering the granita di caffè! 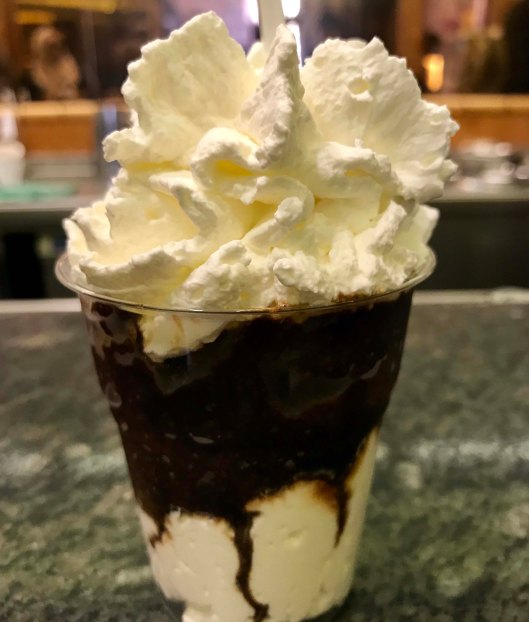 Next, a short walk to the Baroque church of San Luigi dei Francesi, the national church of France in Roma.  San Luigi is open 0930-1245 and 1430-1830 daily, except Sunday the morning hours are 1130-1245.  Walk to the front of the church and on the left side is the Cappella Contarelli-Contarelli Chapel. Here you will find Caravaggio’s 3 paintings on the life of San Matteo-called the St Matthew Cycle in english. When 2 of the works were installed in 1600, they made Caravaggio an instant success. Roma had not seen painting with such intense realism and drama before. 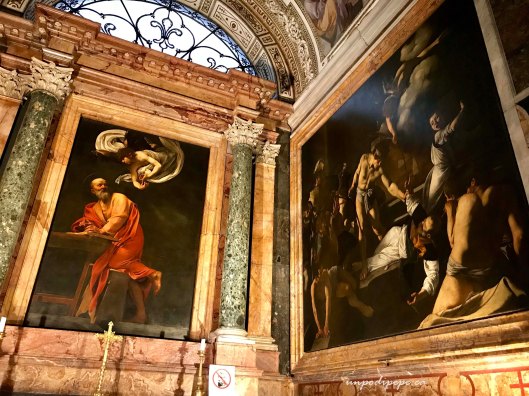 The dark and mysterious Martyrdom of St Matthew is on one side of the altar.  I say mysterious because it is not clear who the murderer is.  Is it the slave offering his hand, the man fallen on the ground, or the shadowy figure lurking in the background with the face of Caravaggio?  Hmmm.  The Calling of St Matthew is on the other side, and originally a sculpture by another artist was to go above the altar in between them.  Since all other work seemed inferior between these 2 masterpieces, an altarpiece was commissioned from Caravaggio in 1602. This painting, San Matteo con l’angelo-St Matthew and the angel, is a ‘redo’.  The first version was rejected as it portrayed San Matteo as an old peasant with the angel moving his hand, as if he could not write.  The painting was destroyed in Berlin during WWII, and only black and white photos of it remain. 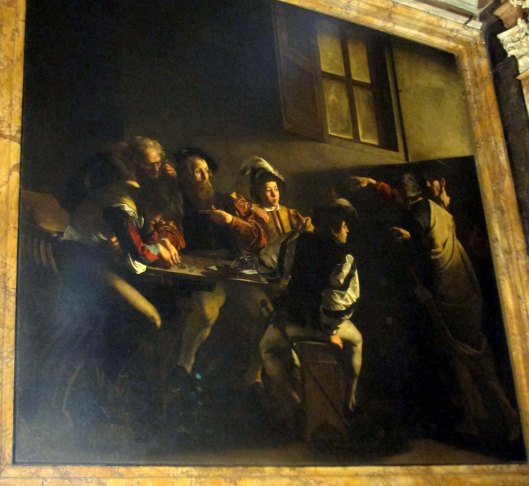 My favourite of the series is on the other side of the altar, The Calling of St Matthew.  This painting has the best ever use of shadow and light in a work of art.  A group of men are counting money in a dingy tavern room.  A brilliant beam of light coming from an unseen window symbolizes the light of God.  The shape of the shadow is in line with the finger of Jesus, pointing at Matthew the tax collector.  He is the one who has a ‘huh, who me?’ look on his face while he points at himself.  The pointing finger may be a reference to that other Michelangelo, looking like the iconic finger of God in the Sistine Chapel Creation of Adam. I always leave San Luigi in an overwhelmed but contented state of ‘Wow’.

Leaving San Luigi we go left and walk ~200m turning left at the brown sign for Sant’Agostino.  This was the first Renaissance church in Roma at Piazza Sant’Agostino, close to Piazza Navona.  It is open 7:45-12 and 16:30-19:30.  Here you will also find works by Raphael, Guercino and Andrea Sansovino.  In the Cappella Cavalletti, the first chapel on the left, is Caravaggio’s magnificent Madonna dei Pellegrini-Madonna of the Pilgrims (1605), sometimes called the Madonna di Loreto. 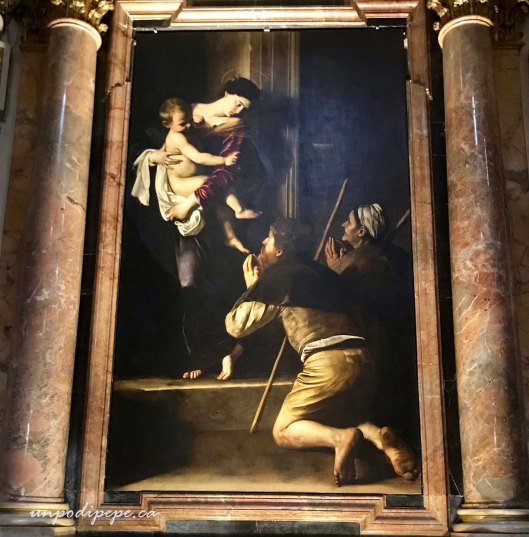 The Madonna is usually portrayed dressed in fine fabrics, seated and surrounded by cherubs and clouds.  In this painting, she is a beautiful but ordinary woman answering the door of an ordinary house in bare feet and holding a rather large baby Gesù.  The kneeling pilgrims have dirty feet.  If the Madonna looks familiar, she is the same model from the Madonna dei Palafrenieri (1606) discussed in my Galleria Borghese post. She is thought to be Maddalena ‘Lena’ Antognetti, a well-known prostitute, and possibly Caravaggio’s lover at the time.  These details were all quite scandalous at the time.  I was mesmerized by the beauty of this painting.  My Roman friend recently came with me to Sant’Agostino and I found out this is his favourite painting.  To quote  his comment  …..‘Questo è il collo più sensuale nella storia dell’arte‘-‘This is the most sensuous neck in the history of art’! 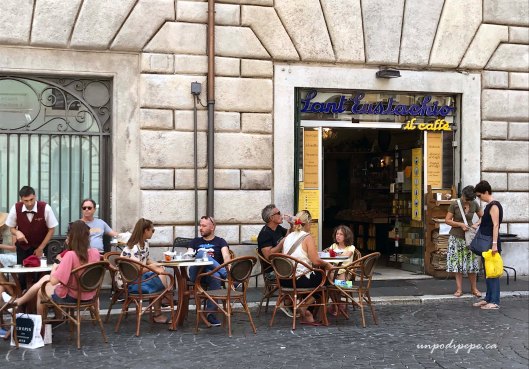 Our next stop is Caffè Sant’Eustachio a few blocks away in Piazza Sant’Eustachio 82. Operating since 1938, their caffè is pre-zuccherato.  They whip in a spoonful of sugar while making the caffè and it always tastes perfect.  A sign states that if you do not want sugar added, let them know in advance!  My favourite beverage is un marrone-usually called un marrocchino everywhere else. Every bar in Italia makes un marrocchino differently, but it is always delicious. Sant’Eustachio ties with the Aeroporto Capodichino, Napoli for the best! 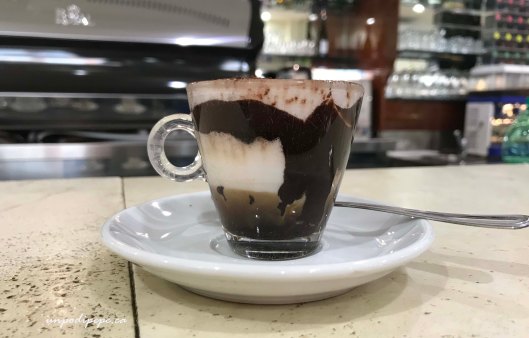 The last church on this Caravaggio passeggiata is a father walk.  There are 3 streets leading to Piazza del Popolo, but I usually get back onto Via del Corso, the long shopping street that leads straight there.

If you are not yet sufficiently caffeinated, turn right on Via dei Condotti, Roma’s most expensive shopping street and, before reaching Piazza di Spagna, stop at #86, Antico Caffè Greco. Roma’s oldest and Italia’s second oldest coffee bar, it has been around and frequented by literary types since 1760. Byron, Keats, Stendahl and Goethe are among those who have enjoyed caffè here.  In my photo below, Caffè Greco is on the left, approximately below the flag.  Caffè Greco is in danger of closing due to the exhorbitant rents on Via dei Condotti! 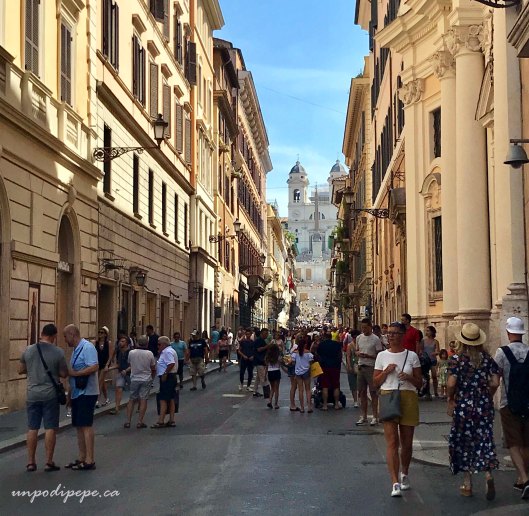 Piazza del Popolo can be reached by Via del Babuino, Via del Corso or Via di Ripetta. Santa Maria del Popolo, Piazza del Popolo 12, was designed by Bernini and is in the north-east corner of the piazza.  It is open 0930-1230 and 1630-1900, except for Saturday when it is open 0730-1900.  At the front, left side of the church is the Cappella Cerasi-Cerasi Chapel where we find the last 2 Caravaggio works on our passeggiata.  Both painted in 1601, on the left is The Crucifixion of St Peter and on the right The Conversion of St Paul on the way to Damascus.  The work above the altar between them is by Annibale Caracci.  Both paintings have dark backgrounds with awe-inspiring light and colour on the figures, which take up the whole canvas.  In the Crucifixion, you can feel the pull and weight of gravity even pushing out past the borders of the canvas. 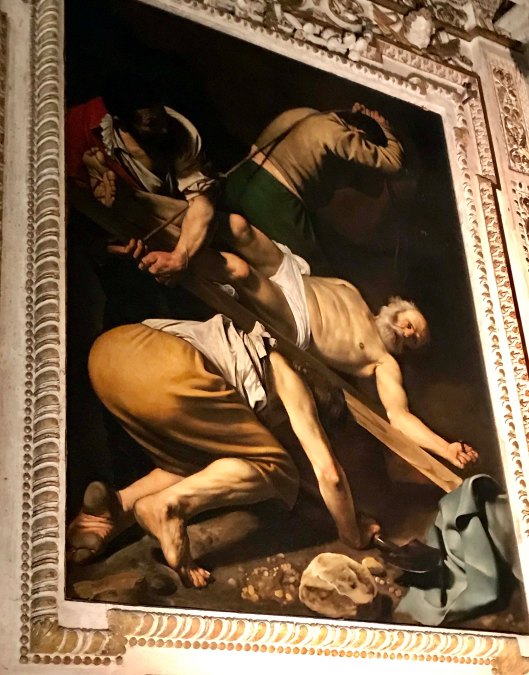 The second painting captures the moment from the Acts of the Apostles when Saul-whose job was to persecute Christians, heard the voice of God and was blinded by the light, falling from his horse.  In case the name is confusing, he later slightly changed his name and became the apostle Paul.  This painting was often criticized for the ‘horse’s ass’ taking up so much of the picture plane. 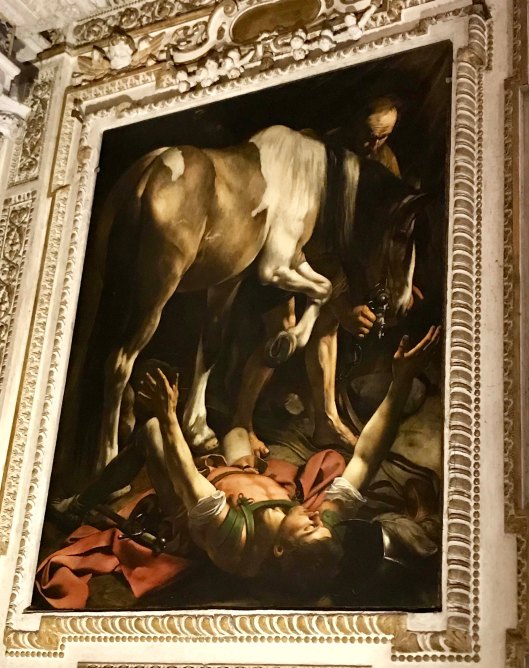 This is the end of the Caffè con Caravaggio for free walking tour.  Scusi for the poor quality map!  I will replace it as soon as I figure out how to imbed one. 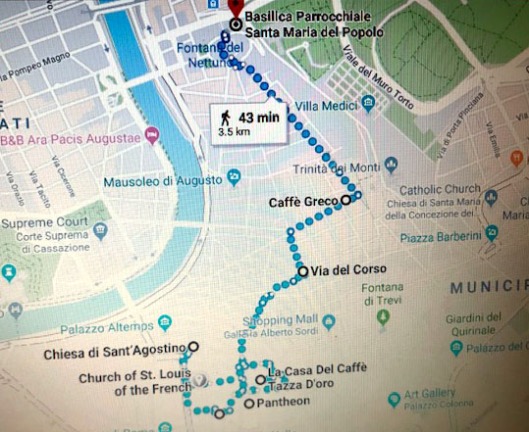 If you want to see more Caravaggio works—no problem!  This passeggiata can be extended from both ends!  From Piazza del Popolo, Galleria Borghese room VIII has 6 Caravaggio works and is an uphill walk or short bus ride away.  Unfortunately it is not free, and reservations must be booked in advance. Read about the booking process here. Galleria Borghese can be visited either before or after this walk-my recommendation is before. In the photo below, Santa Maria del Popolo is to the left of the gate, under renovation.  Via del Corso is straight ahead, and past the gate is the walk to Galleria Borghese. 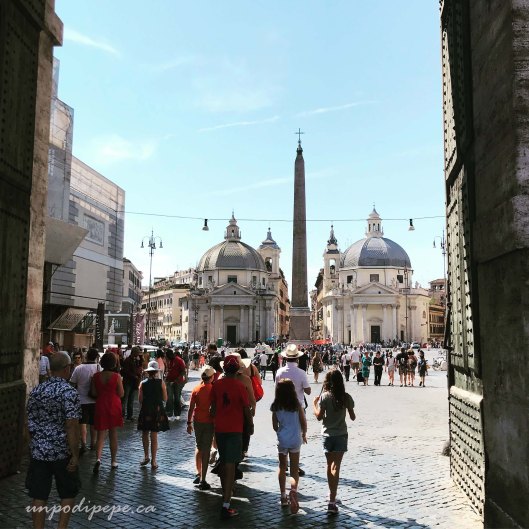 Walking back down Via del Corso, just before Piazza Venezia, stop at #305, Galleria Doria Pamphilj. Here you can see 2 Caravaggio works, including his only landscape painting Riposo durante la fuga in Egitto -Rest on the flight to Egypt (1597). Galleria Doria Pamphilj also has an entry fee of €12 but does not require a reservation. Galleria Borghese, followed by the free Caffè con Caravaggio tour, then the Galleria Pamphilj will take up most of a day and leave you in a wonderfully warm and fuzzy ‘Caravaggio coma’! I hope you all have the opportunity to take this passeggiata some day.