It is probably obvious from my photos that I love le feste Natalizie-the Christmas season.  Festive décor, lights, music and baking help me get through the early darkness and awful weather at this time of year.  I decorate every room in my house, but my favourite piece of Christmas is definitely the Presepio.  A few years ago, I wrote a blog post about the history of Il Presepio and have included photos of mine in previous December posts. 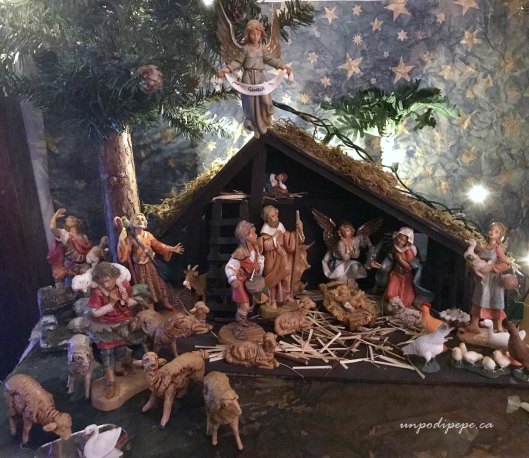 My Presepio has grown over the years, but includes mostly the ‘main players’.  My Mamma’s Presepio also started out this way, but is now a whole village.  It was originally placed under the tree, since l’albero di Natale was a new tradition for most new italocanadesi.  It was eventually moved to the fireplace hearth, and then to a table.  The stable was originally ‘rustic’, made with one of those large paper grocery bags, with the rim folded down many times and a window cut out the back for a light, or a mandarin orange box covered in brown butcher paper. The figures were the Holy Family, an angel, and ox and donkey, a shepherd with a few sheep and the 3 Wise Men. The manger is empty in the photo, as Baby Gesù does not get placed there until tonight, la Vigilia di Natale.

The 3 Wise Men or Rè Magi are far off in the hills since they do not arrive in Bethlehem until the l’Epifania, January 6th. Trailing behind is La Befana trying to catch up to them. 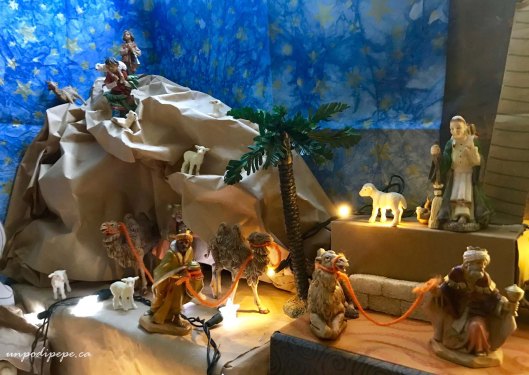 Presepio figures are not easy to find in Vancouver, but she slowly acquired village people, more shepherds, camels and lots of other animals.  Various pieces were purchased in Assisi, the Vatican and Mexico, even a napkin holder from Venezuela doubles as il forno.  The beautiful starry sky was brought by a friend from Roma. In August I went to Via San Gregorio Armeno in Napoli, the street famous for Presepio making artigiani. 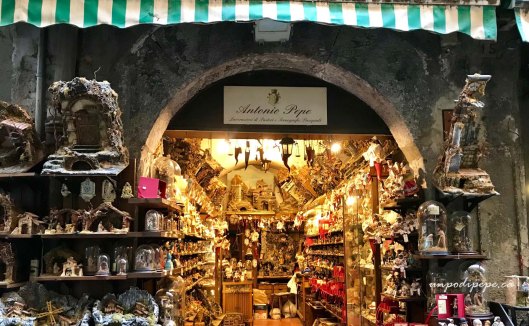 The Presepio inventory is low in summer, but I bought a terra cotta prosciutto, capicollo and cacciotta and a cestino of eggs which you can see in the photo below. I also bought 2 tiny chairs just like the ones we have in Orsara. I forgot to buy a zampognaro-an Abruzzese bagpiping shepherd-so I will have to go back to Napoli!

Mamma gets very detailed and creative with her Presepio. She starts working on it mid November and really enjoys putting it together. I am often asked to help create accessories.  The cutest detail is the tiny loaves of bread, panini and focaccia Pugliese that she bakes for the forno.

Dear readers of Un po’ di pepe, I wish you a very Merry Christmas and a marvelous 2019 filled with health and joy! 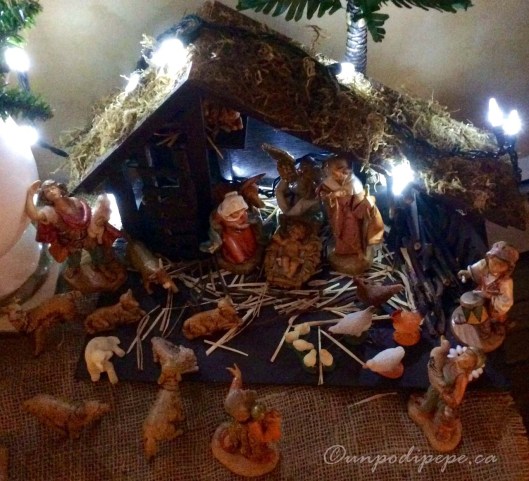 L’Immacolata is the feast of the conception of the Virgin Mary on December 8th.  It is a national holiday in Italia and also the official beginning of the Feste Natalizie.  Italiani usually put up l’albero di Natale (the Christmas tree) and il Presepio (the Nativity scene) on this day.

San Francesco d’Assisi created the first Presepio in 1223 in a cave in Greccio.  He had been to the birthplace of Gesù (Jesus) in Bethlehem and was inspired to recreate the scene.  This was his attempt to return the emphasis of Christmas on the birth of Christ rather than gift-giving.  I find it interesting that the ‘commercialization’ of Christmas is not a new concept at all.  Searching for ‘the true meaning of Christmas’ did not start with Charlie Brown but in the 13th Century!

San Francesco’s was a ‘Presepio Vivente’, with real people and animals.  The live figures were eventually replaced by statues, and Presepi also started to be set up in homes.  The Presepio includes the Holy Family-although Bambino Gesù is not placed in the manger until after midnight Christmas Eve-angels, shepherds, animals, and the Re Magi (3 Wise Men).  The 3 Wise Men are at a distance, since they arrive on January 6th.  I also have my Befana figurine trailing behind them!  Several hundred years ago, Presepi also started to include scenes from village life.  Of course before Google Earth, Wikipedia, or even photography, no one actually knew what 1st Century Bethlehem looked like, so the village scenes resembled the local areas.  The tradition of the Presepio is popular throughout Italia, with most families having one. My Mamma gets very detailed and creative with her Presepio, even baking tiny bread, pizze and Panini.

Via San Gregorio Armeno in Napoli is lined with artigiani (artisans) making presepio figurines and accessories all year round. The attention to detail is incredible! I must go and get myself a zampognaro (zam·poh·NYAH·roh) for my presepio.  This is a traditional Abruzzese bagpiping shepherd! The 2 photos below of San Gregorio Armeno artigiani were taken by my amica Anna. 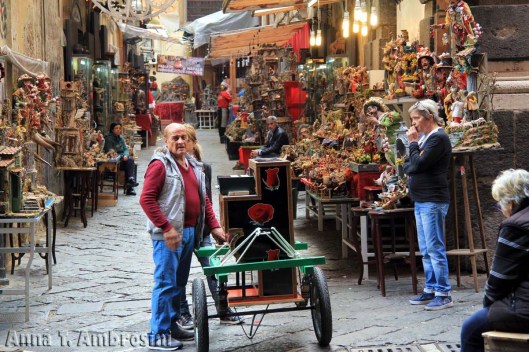 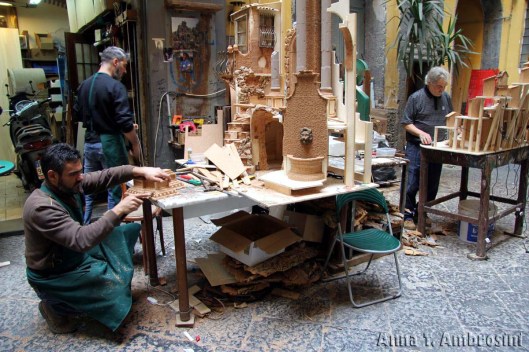 Many villages, including Orsara di Puglia, have a Presepe Vivente in December.  Like the original one, this features the live Nativity and also artisans in traditional costume working on trades and making traditional local dishes. I’d love to hear what you have in your Presepio!

Day trip to Bowen Island with a 20 min ride on BC Ferries #bowenisland #beautifulbc #bcferries #snugcove #snugcovebowenisland #daycation #staycation #unpodipepe
Almost ready for pesto! Recipe in blog archives #vancouvergardens #garlic #aglio #pestoingredients #pestogenovese #organicgarlic #unpodipepe
🇮🇹🇮🇹🇮🇹 #eurocup2021 #eurocup #azzurri #unpodipepe
Lineups suck, but if you have to wait in line for a covid vaccine, what a gorgeous place to do it! We gave 4890 vaccines yesterday under the sails! #vancouverconventioncentre #covidimmunizationclinic #covidvacccine #vancouver #beautifulbc #britishcolumbia #canada #unpodipepe
Mezzaluna di melanzane 🍆 Made in today’s zoom class with @domenicacooks #mezzalunedimelanzane #mezzalunepasta #stuffedpasta #eggplantravioli #pastafattaincasa #handmadepasta #unpodipepe
Ready for my zoom stuffed pasta class with @domenicacooks #stuffedpasta #pastafattaincasa #unpodipepe
I just found out it is International Cannoli day! Too late for me to have one now, but maybe tomorrow. For now I will have to settle for a photo 😋. #cannoli #cannolisiciliani #dolcifattiincasa #italiandesserts #homemadecannoli #unpodipepe
My new table runner and aprons ordered from @bluestarpositano have arrived, complete with handmade thank you card from Leni and Rosi #amalficoastfabric #luisapositano #luisapositanoshop #positano #amalficoast #unpodipepe
Auguri Måneskin! Auguri Italia! San Temo winners Månrskin win the Eurovision Song Contest with Zitti e Buoni 🎉🎉🎉. This means Eurovision is in Roma next year!