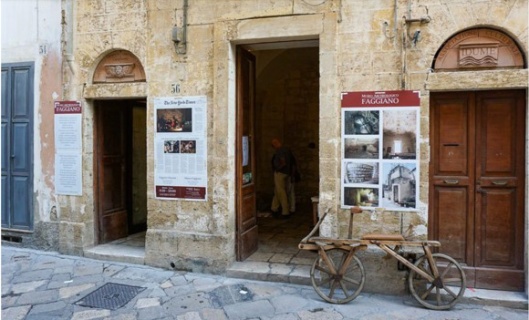 Museo Faggiano is a family run, independent archeology museum in Lecce and also a working archeological site.  This is a small museum with big history! In 2001, Luciano Faggiano planned to open a restaurant with his 3 sons Marco, Andrea and Davide in a building he owned in Lecce’s Centro Storico.
The building had issues with dampness and sewage backup, likely caused by broken pipes.  Since a working toilet is kind of important, the Faggiano family planned all took 1 week off to work on the plumbing themselves.

They started digging and found a false floor.  Beneath that, they uncovered 4 subterranean levels to other worlds.  They found Messapii tombs and an ossuary from the 5th Century BC.  The Messapii were from Crete and settled in Southern Italia.  They also uncovered a Roman granary, silo, cisterns a 10 m deep well and even an underground escape tunnel leading to the Roman anfiteatro a few blocks away.  From 1000-1200, the building was a House of the Knights Templar, who left their emblems on frescoes and wall etchings.  A Franciscan chapel and religious artifacts were found from the convent of Sisters of Santa Chiara, which the building was from 1200-1609.  Each of these populations left their traces in the unassuming little building.

After 7 years of excavation, the museum opened to the public in 2008.  All of the work was financed by Signor Faggiano, under the supervision of the Archeology superintendent of Taranto.  In Italia, anything found underground belongs to the government no matter who owns the property.  This was clearly a labour of love.

In addition to the architectural elements of the builing, treasures found include a gold and emerald Jesuit bishop’s ring, coins, lots of pottery fragments and a stone sculpture with the abbreviated Latin inscription ‘Si deus pro nobis quis contra nos’ -If God is with us, who can be against us?

In 2015, Museo Faggiano was featured in a NY Times article.

Museo Faggiano is at Via Ascanio Grandi 58, a short walk from Piazza Sant’Oronzo.  It is open daily from 9:30am-8pm.  Admission is €5.  Often one of the family members is there to answer questions.  A numbered sheet with self-guided tour is available in many languages.

Imagine 2500 years of history in one small house!  If you are like me and have an inner Indiana Jones, and your palms sweat when surrounded by unique archeology, you will be fascinated by Museo Faggiano!

Luciano Faggiano finally did open his restaurant Quo Vadis, next door in June 2019. He is not planning to dig up the pavimento!