Carnevale season is here.  From the Latin Carnem Vale meaning farewell meat, Carnevale is the week leading up to la Quaresima (Lent). La Quaresima is the period of 40 days between Mercoledi delle Ceneri (Ash Wednesday) and Pasqua (Easter).  There are actually 46 days, but the Sundays are not included. Carnevale was traditionally a period of overindulgence before the more humble days of Lent when there was no meat, dairy, fat or sugar and sometimes even days of fasting.  Martedi Grasso (Mardi Gras or Fat Tuesday) is the last day of Carnevale and the last opportunity for excesses.

Like most religious events/festivals, Carnevale and Lent took over from pagan and folk rituals.  This time of year brings the transition from winter to spring and the return of increased daylight. I can’t wait for sunshine and more daylight! For most people, Carnevale was their last opportunity to eat well.  They did not have freezers or refrigerators, so the winter stores of food would be running out or starting to rot.  The avoiding of meat, dairy and fat was not originally for religious reasons-it was going to happen anyways. Lent was a way to mentally prepare and get through this last bit of winter!  Today it is common to not eat meat on Ash Wednesday and on Fridays during Lent.

The Carnevale di Venezia was first recorded in 1268.  It involved masked balls, parades, decorations, costumes and masks, and even dressing as the opposite sex.  You can imagine things often got out of hand!  Napoleon outlawed Carnevale in 1797, and it was only restored 182 years later, in 1979.

Today Carnevale in Italia is celebrated in Venezia, Viareggio, Ivrea and Putignano. Carnevale in Viareggio is known for its parades featuring political and satirical floats.  I would like to experience Carnevale di Venezia one of these days.  Carnevale is also celebrated in other parts of the world, including Rio di Janeiro, New Orleans and Mazatlan.  For many years, I was involved with the ‘Carnaval‘ in Mazatlan, Mexico with the Seattle Seafair Clowns,  participating in 2 parades and a childrens’ festival.

Crustoli are fried, sweet shapes of dough made for Carnevale-as well as Christmas and Easter.  They are known by different names all over Italia.  They are Crustoli or Galani in Puglia, Bugie (lies) in Piemonte and Liguria, Cenci ( rags) in Toscana, Chiacchiere (chitchat or gossip) in Lombardia and Calabria, Crostoli in Veneto and Friuli, Frappe in Lazio and Umbria and Sfrappole in Emilia Romagna!  I hope I got them all right!  In Poland, they are known as Chušciki. Recipes vary as well, but they are all very similar.  Some have milk or baking powder and some do not.  Here is my recipe, which is quite simple:

Grated rind of 1 orange or lemon

Mix all ingredients together and form into a ball. Roll half of the dough at a time out thin with a mattarello (rolling pin) or use a pasta machine.  If you like them very thin and crispy, the pasta machine will work better.  I like mine a little chewier.  Cut crustoli into shapes with a pastry wheel.  I like to make mine into bows or tie them in knots, but you can also just cut rectangles or triangles.  Fry them in oil.  I use sunflower or olive oil.  Grapeseed oil can also be used.  They cook very quickly!  Drain on parchment paper or paper towels and dust with icing sugar. Note-this recipe does not make a large amount so you may want to double it! 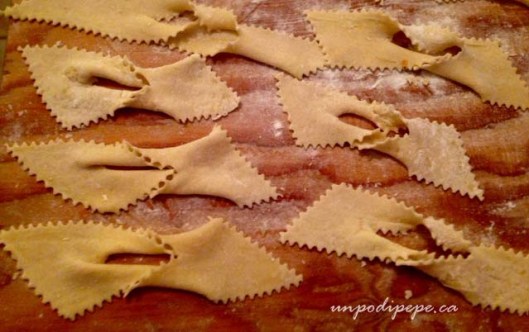 Not being able to travel really sucks. Going through old photos, I came across these from a long ago visit to Marostica for the Partita a Scacchi in Costume a Personaggi Viventi-the live costumes chess game. It is a reenactment of a game played in 1454 in the piazza, which is a giant marble chess board. The event takes place every other year. View the whole event and find out more in new blog post #marostica #partitaascacchimarostica #scacchi #vicenza #veneto #partitaascacchiapersonaggiviventi #scacchiera #unpodipepe
It’s grape-crushing time again 🍷 🍇 #winemaking #grapecrushing #zinfandel #winemakingseason #uva #lavendemmia #vino #italiancanadiantradition #unpodipepe
Steveston Grand Prix of art outdoor painting competition. The rain waited till the artists were finished painting 😊 #grandprixbc #stevestongrandprixofart #travellingbrush #britanniashipyards #stevestonvillage #pleinairpainting #unpodipepe
Drying pomodori seeds to use next year 🍅 #pomodori #tomatoseedsaving #tomatoseeds #inmygarden #vancouvergardens #unpodipepe
Torta Caprese all’Arancia for @susanne_in_the_sun ‘s bday 🥰 Recipe in blog archives #tortacaprese #tortacapreseallarancia #dolcifattiincasa #glutenfreechocolatecake #unpodipepe
Since April, I have been working as a covid immunizer. Excerpts from my experiences are featured in my new blog post ‘Reflections from a covid immunizer’. I hope you enjoy them! Link in bio. #covid_19 #covidvacccine #immunization #covid19immunization #covid19canada #vancouvercoastalhealth #getvaxxed #thisisourshot #unpodipepe
Making passata di pomodoro 🍅 with la famiglia the past 2 days. The cantina is full again! Posts ‘Passata di Pomodoro’ and ‘Pomodoro day’ in blog archives. Link in bio. #pomodori #passatadipomodoro #lasalsa #canningtomatoes #pureedtomatoes #pomodoroday #facciamolasalsa #fbcigers #unpodipepe
My pomodori come in all shapes and sizes 🍅 #pomodori #tomatoes #inmygarden #vancouvergardens #mioortobio #unpodipepe
When all the figs are ripe at once and you can’t even eat one more…..make jam and crostata! #italianproblems #figs #fichi #figjam #crostatadifichifreschi #crostatadifichi #dolci #marmellatadifichi #vancouvergardens #unpodipepe