Napoli is gritty, wonderfully chaotic, passionate and anything but boring, making it a perfect place for self-expression.  Graffiti is not a new concept to the Napoletani.  Ancient graffiti can be found in Pompeii, including ‘I was here’ type messages and suggestive notes written on the walls of the brothel.  In the historic center of Napoli graffiti, posters and murals have been elevated to a fine art form.  I was in Napoli on a search for Blub street art and ended up finding so much more.

Volto di Sophia, a colourful Bollywood inspired portrait of iconic Napoletana Sophia Loren is on Vico dei Zuroli, just off of Via dei Tribunali.  The artist is Stikki Peaches, originally from Montreal.

Madonna con la Pistola is the only work in Italia by the elusive and mysterious English street artist Banksy.  It is in Piazza Gerolamini, off of Via dei Tribunali.  The Madonna in ecstasy with a gun in place of a halo is the artist’s exploration of the relationship between religion and organized crime.  It has now been covered by glass for protection from the elements. 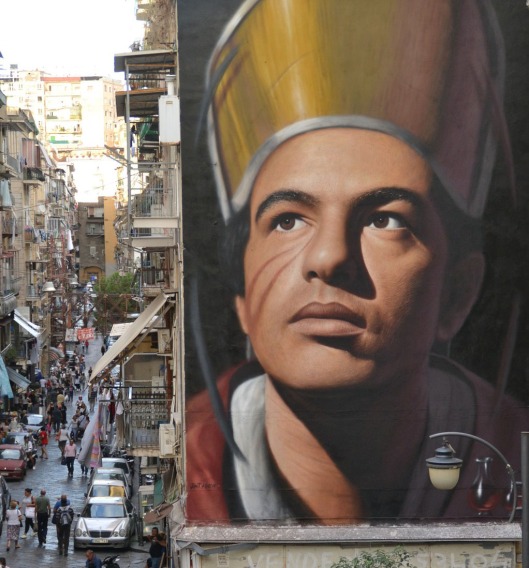 San Gennaro, a hyperrealistic 15m high portrait of Napoli’s patron saint is by Italian- Dutch artist Jorit Agoch (Jorit Ciro Cerullo).  It is on Via Forcella near the Duomo.  The model is the artist’s friend, a mechanic also named Gennaro.  This could be an homage to Caravaggio, who would take ordinary people off the street to be his models for paintings of extraordinary people. There are more ginormous Jorit murals in the Ponticelli Graffiti park near the airport and in the financial district. 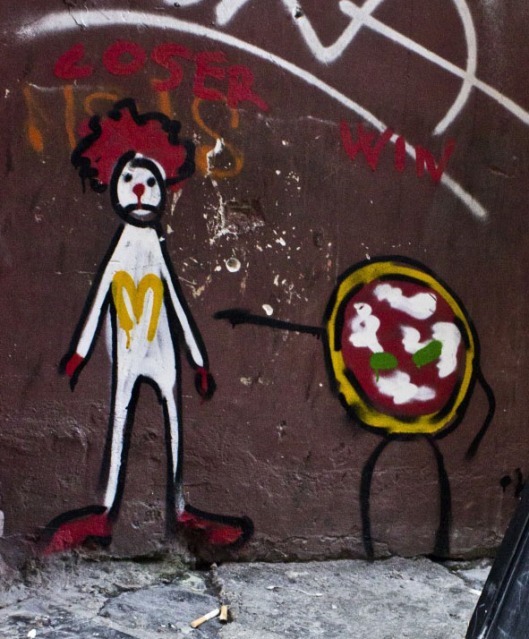 Exit/Enter is a street artist from Firenze who paints whimsical, expressive stick figures. There are a few Exit/Enter works around Napoli, including this one which I though was an angry pizza and a clown.  Then I realized the clown looked like a skinny Ronald McDonald.  Sure enough-it is titled ‘Pizza vs McDonald’s’! I do not remember the name of the street, but it was also just off of Via dei Tribunali. 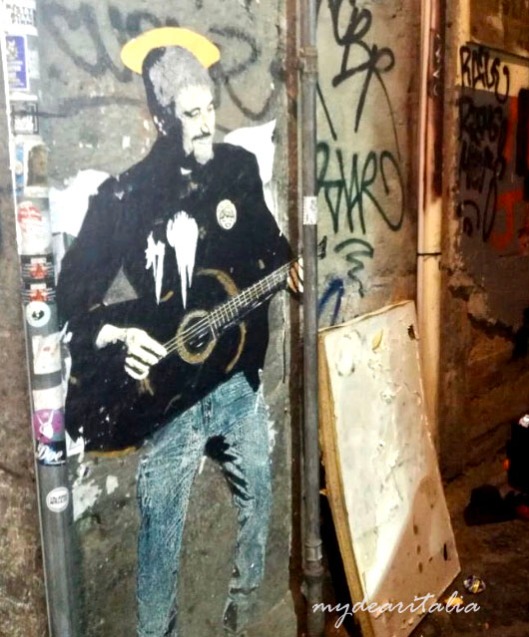 Beloved Napoletano singer Pino Daniele passed away in 2015. Pino with his smile and guitar is sainted by artist TvBoy in San Pino Daniele found in Vico dei Panettieri.  Grazie to Sara from My Dear Italia for the photo. 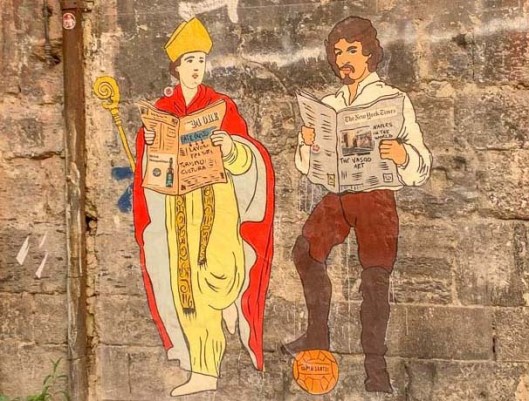 Mission Possible is the colourful mural by Napoletana artist Roxy in the box (Rosaria Bosso). She includes 2 important figures in the history of Napoli; San Gennaro and Caravaggio. They are casually hanging out reading the New York Times and 24 Ore.  It is in Piazza Cardinale Sisto Riario Sforza, near the Duomo, Pio Monte della Misericordia and Via dei Tribunali.

This stencil baby is on an electrical panel is near the lineup to get into the Cappella San Severo.  The signature on the bum says Joan Aquito.

Giuseppe Verdi and a Renaissance woman covered by a shop door are the only Blub work I found on the street after visiting the Blub Pompeii inspired exhibit at the Museo Archeologico Nazionale Napoli.  I was disappointed not to find Totò, another iconic Napoletano.  For more Blub love, read Blub a Napoli and L’arte sa Nuotare.

I hope you enjoyed this street art tour of Napoli Centro Storico! More Napoli information can be found in Un Giorno a Napoli. 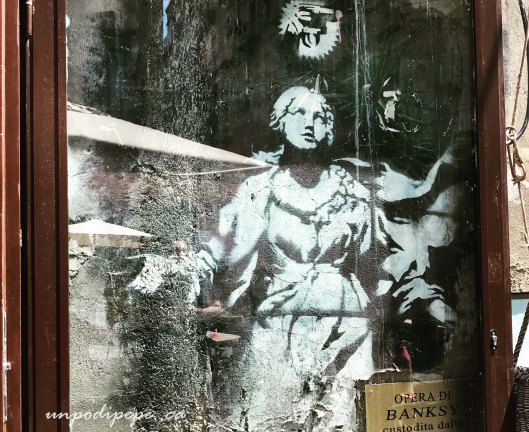