Trabucchi (tra∙BOO∙kkee) are fascinating old fishing contraptions found on the Adriatic coast of Abruzzo, Molise and Puglia. When I was young, I remember taking ‘L’Adriatico’-the night train from Bologna to Foggia- on a stormy night. With the sound of the wind and the waves the crowded train was not a place I was going to get any sleep.  Once the train reached the coast, I spent most of the trip looking out the window watching the waves crashing onto these strange giant spidery things in the water.  To my wild imagination, they seemed like giant wooden aliens or octopi that would come to life at any moment with their tentacles thrashing in the surf.

A trabucco is made up of a wooden platform on poles anchored to a rocky cliff or promontory, with several long wooden arms jutting out over the sea.  The arms have a system of ropes and winches suspending a giant narrow-mesh net called a trabocchetto.  Trabucchi are made of Aleppo pine which is abundant in the area and is resistant to salt and weather conditions. 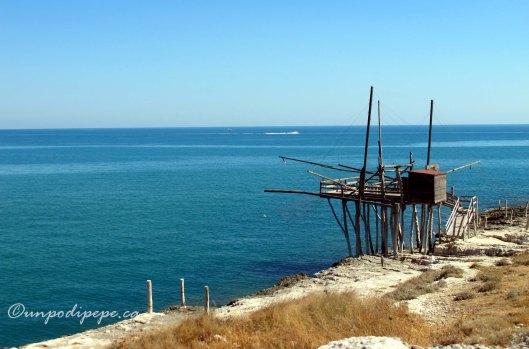 Along the coast of the Promontorio del Gargano (Gargano Promontory) there are 13 working trabucchi between Peschici and Vieste.  The oldest dates from the 18th century.   They are protected as National cultural heritage sites within the Parco Nazionale del Gargano.  Here is a link to a Trabucchi del Gargano map.

Although there is no documentation, Pugliese historians believe the trabucco design is imported from the ancient Phoenicians. They really are an ingenious way of fishing to take advantage of the rocky coastline and crystal clear waters of the Gargano. Trabucchi are built facing SE or NW and where the water is at least 5 m deep, to take maximum advantage of the marine currents.

A trabucco requires 3-4 operators or ‘trabuccolanti’.  1 or 2 trabuccolanti look out for schools of fish swimming along coastal currents.  They give word, then the other 2 operate winches to drop the trabocchetto (net) and quickly hoist it back up full of fish.  Gargano fisherman of old really created an extension of the land-with a trabucco they were able to fish from the rocky cliffs and did not have to ‘get their feet wet’ or take boats out in dangerous agitated seas. 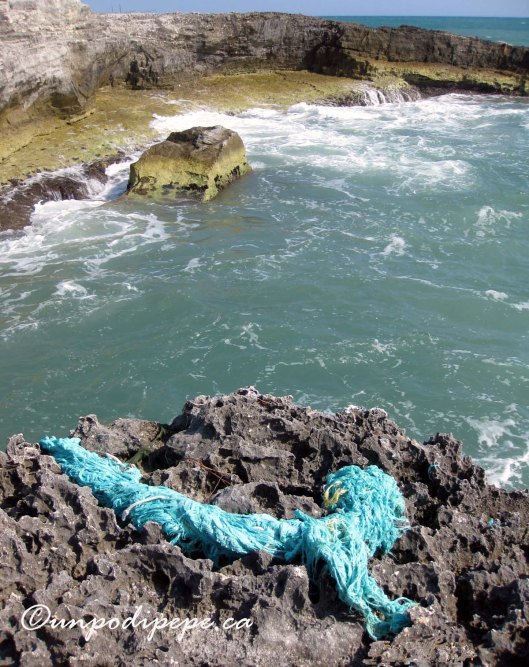 The view below Trabucco Punta Lunga

Trabucchi have become symbols of ancient maritime culture. I’ve been on several weekend camping trips in the Gargano with my cugini, and have been able to visit several trabucchi.  Imagine my excitement 2 years ago when the beach by our campsite at Punta Lunga, 2km north of Vieste had it’s very own trabucco!